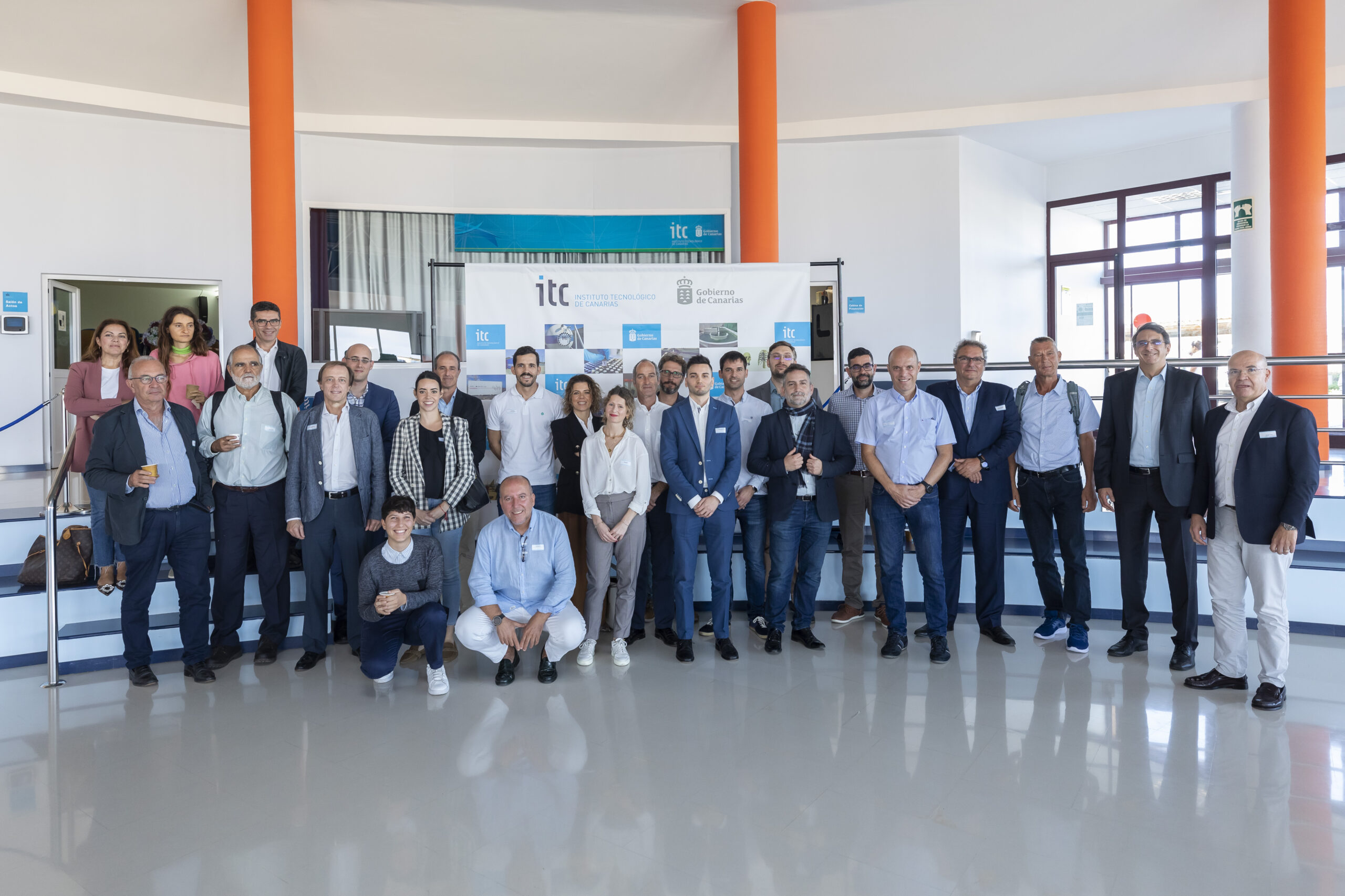 On 28 November 2022, FEDARENE and the Canary Islands Institute of Technology (ITC) invited several partners of the Green Hysland project to exchange on the sustainable integration of green hydrogen in island electrical systems.

Scroll down for the recording and slides!

After Cres, Gran Canaria is the second stop on Green Hysland’s Tour of European islands – its ‘Transferability Roadshow’, aiming to disseminate information on the project, but also to establish synergies and engage with other stakeholders of the green hydrogen sector.

Our host,  the Canary Islands Institute of Technology (ITC), has been developing innovative solutions to increase Renewable Energy Sources (RES) penetration in small and weak insular electrical grids for over 25 years. Green hydrogen quickly presented itself as an interesting technology.

ITC’s Facilities in Pozo Izquierdo are home to the first hydrogen activities ever in the Canary Islands. We started our activities on hydrogen technologies 20 years ago with feasibility studies. We jumped to technical installations 16 years ago.

ITC’s vast experience was further demonstrated first by Santiago Díaz Ruano, who presented the green hydrogen roadmap in the Canary Islands, embodied in the document prepared by the Institute together with the rest of the support strategies for the Canary Islands Energy Transition Plan ( PTECan 2030) led by the Ministry of Ecological Transition, Climate Change and Territorial Planning of the Government of the Canary Islands.

Later during the day,  Salvador Suárez García, head of the Renewables Department at ITC showed the steps the Technological Centre is taking in the implementation of infrastructures for research and testing of new renewable fuels for sustainable mobility, especially aimed at public transport. A key project currently under development in this domain is Biogreenfinery (Green Hydrogen for biorefinery), co-funded by the EU’s Recovery Aid Fund and the regional government of the Canaries. The biorefinery will operate in a self-consumption regime isolated from the grid through a hybrid wind-photovoltaic-biodiesel system that will provide the renewable energy necessary to produce hydrogen and synthesis fuels derived from it. This biorefinery will be the first in the Canary Islands to operate in isolated network conditions.

The workshop aimed to bring together ITC representatives with experts from the Green Hysland project, in order to compare their experience and discuss how to accelerate the decarbonization of islands through green hydrogen technologies. Green Hysland was represented by Enagas Renovable, Redexis, CALVERA, University La Laguna, and the Spanish Hydrogen Association (AeH2).

Carlos Navas Pérez (Enagas Renovable), the coordinator of the project, first laid the ground by explaining the context in which Green Hysland was developped and the structure of the pilot: 2 PV plants to produce the green hydrogen, a pipeline to distribute the hydrogen to different end-user applications (hotel, municipal building, transport applications, port), and some of the H2 to be injected into the natural gas distribution network. Most of these activities will be in operation in the course of 2023. By the end of the project (december 2025), Green Hysland hopes to avoid 21,000 tons of CO2 emissions per year.

When developing a green hydrogen project, it is essential to have some procedures in place to manage the administative processing. As explained by Pablo Martínez Fondón from Redexis, there is a quite diverse picture on the current status of national legal and technical framework in regards to hydrogen implementation in Europe. In Spain, a lot of national decrees were introduced since the start of the Green Hysland project in order to simplify the procedures.

Green Hysland was a first timer. It opened the way and even anticipated the establishment of the necessary regulatory frameworks.

Moving to technical considerations, David Capapey shared the large experience of Calvera on the storage and transport of high-pressure hydrogen through several projects they are involved in. Calvera is a leading manufacturer of H2 equiments in Europe who dedicates a part of its revenues on research, and carefully studies the needs and requirements of each project, in order to adapt the design of their equiments accordingly. In Green Hysland, they are provide two tube trailers to distribute the green H2 to the different end-users. In addition, they will also provide the storage unit for the Port of Palma as well as an uploading panel to reload the storage from the tube trailer and supply the hydrogen to the fuel cell. Therefore, integration of all equiments is key for this kind of hydrogen projects.

The presentation of Ricardo Luis Guerrero Lemus, professor at University La Laguna, allowed to give the perspective of a Follower Territory of Green Hysland. These seven Territories aim to replicate the Mallorca pilot, and the first step in this regard is analysis of the local situation through different studies. Ricardo thus presented the current situation in Tenerife and the Canary Islands, and the potential for the increase of RES penetration and production of hydrogen on the island.

There is no such thing as hydrogen economy, but rather a energy economy. Hydrogen will be a facilitator for introducing more and more renewable energy into the system and is not an objective per se. The objective is to make sure we go towards a green future, and green hydrogen will help us to get there.

Our last speaker of the day, Enrique Girón (AeH2) started with this powerful statement. For a fast transition into hydrogen technologies, he argued that even though these technologies are advanced and some are already in the market, research and development is crucial in order to continue to improve them and to decrease the costs. Regarding islands, each one is different and stakeholders have to understand their energy and storage capacities.

Onsite participants had the privilege to participate in an open discussion on challenges and opportunities related to the topic, and to visit ITC Facilities and innovation projects in Pozo Izquierdo which deal with RES production and storage, but also biotechnology (production and processing of marine microalgae) and innovation/support to entrepreneurship.

Register to our newsletter to receive invitations to our next events!