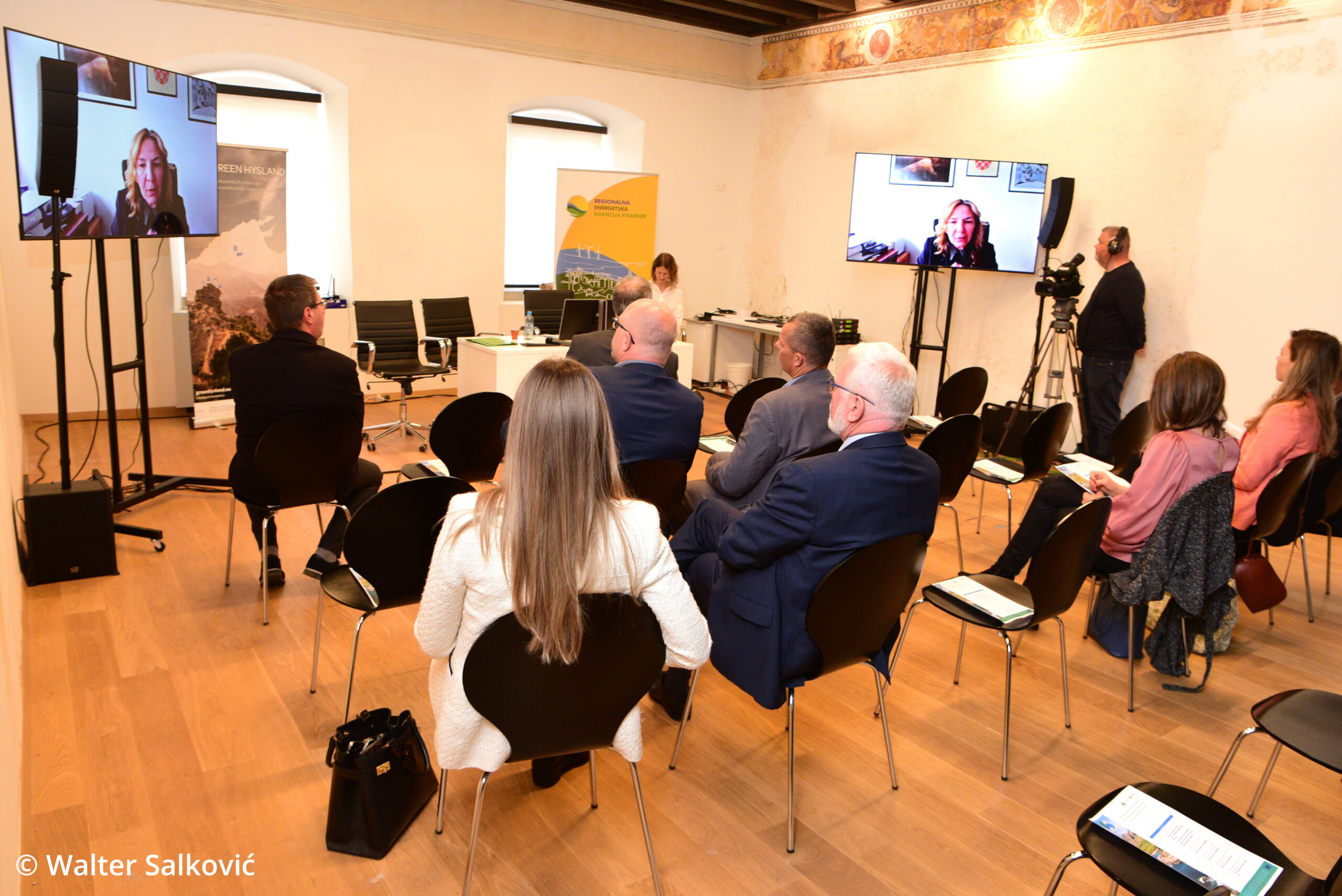 On the 26th of April 2022, Green Hysland hosted its first workshop on the island of Cres to exchange with Croatian and European stakeholders on green hydrogen technologies and its potential to accelerate the energy transition.

It’s no coincidence if Green Hysland chose Cres for its first workshop. Located in the Kvarner Gulf in Croatia, Cres is the largest island in the Adriatic, covering 405,78 km2. In 2019, they started cooperating with the EU Islands Secretariat to develop a Clean Energy Transition Agenda, which mentions hydrogen as a potential solution to decarbonise ferries and transport on the island. In addition, the regional energy agency Kvarner, who was co-organising the event with project partner FEDARENE, is involved in the ISLANDER project which aims to decarbonise EU islands’ energy systems and includes the city of Cres as a follower island.

From strategy to implementation

This year, Croatia has adopted its 2050 hydrogen strategy. Kristina Čelić from the Ministry of Economy and Sustainable Development joined the event remotely to present the strategy. She also mentioned the North Adriatic hydrogen valley that is going to be established in Croatia, Slovenia and Italy (autonomous region of Friuli Venezia Giulia), and encouraged participants to develop more green hydrogen projects. Prof. Frano Barbir (Faculty of electrical and mechanical engineering and naval architecture, University of Split, HR) came back on this hydrogen valley in more details at a later stage.

Croatia is not the only country with such green hydrogen objectives. Since the launch of the European Commission’s strategy in 2020, many national and regional governments have started to think about the issue. Spain and the Balearic region is another example. In her presentation of Green Hysland, Maria Jaén Caparros (Enagás, ES) presented the context that led to the development of the project, including the agreement signed with the Balearic Islands Government to reindustralize the area of IIoseta, while accelerating the decarbonisation of the region.

Northern Netherlands experienced a similar situation, as explained by Patrick Cnubben (New Energy Coalition, NL) with the shutdown of the Groningen gas field foreseen for 2023, which would result in the loss of 20.000 jobs. But the region saw this as an opportunity to become the first European hydrogen valley, upskilling and reskilling workerss, and achieving EU climate and energy objectives.

A key aspect in green hydrogen development is to use the lessons learnt from islands and hydrogen valleys and build from the work that has been done before.

One technology, many opportunities

What the workshop also showed, is that green hydrogen offers many different avenues for the energy transition. It can be used for energy storage, as is the case of the ISLANDER project on the island of Borkum (DE); to decarbonise ferries and planes as EMEC does on the Orkney islands (UK); to offer zero-emission public transport to citizens – the idea conceived by KSSENA for the Savinjsko-šaleška region (SL). The oil company INA (HR) showed how they are using green hydrogen from PV to decrease their carbon emissions, targetting road, rail and sea transport sectors. DOK-ING and Active Solera, two innovative Croatian companies highlighted the potential of waste to produce green hydrogen. The latter is even developing a pilot project on the Cres-Lošinj archipelago together with the municipalities and the waste management agency, which will transform 10 kt of waste /year into clean 800 t of hydrogen.

EMEC, the role of Hydrogen in an Island environment by Leonore van Velzen, EMEC (UK)

Activities of Municipality of Velenje to become a Hydrogen Valley by Boštjan Krajnc, KSSENA (SI)

Status and perspectives of hydrogen technologies in EU and in Croatia by Frano Barbir, Faculty of electrical and mechanical engineering and naval architecture, University of Split (HR)