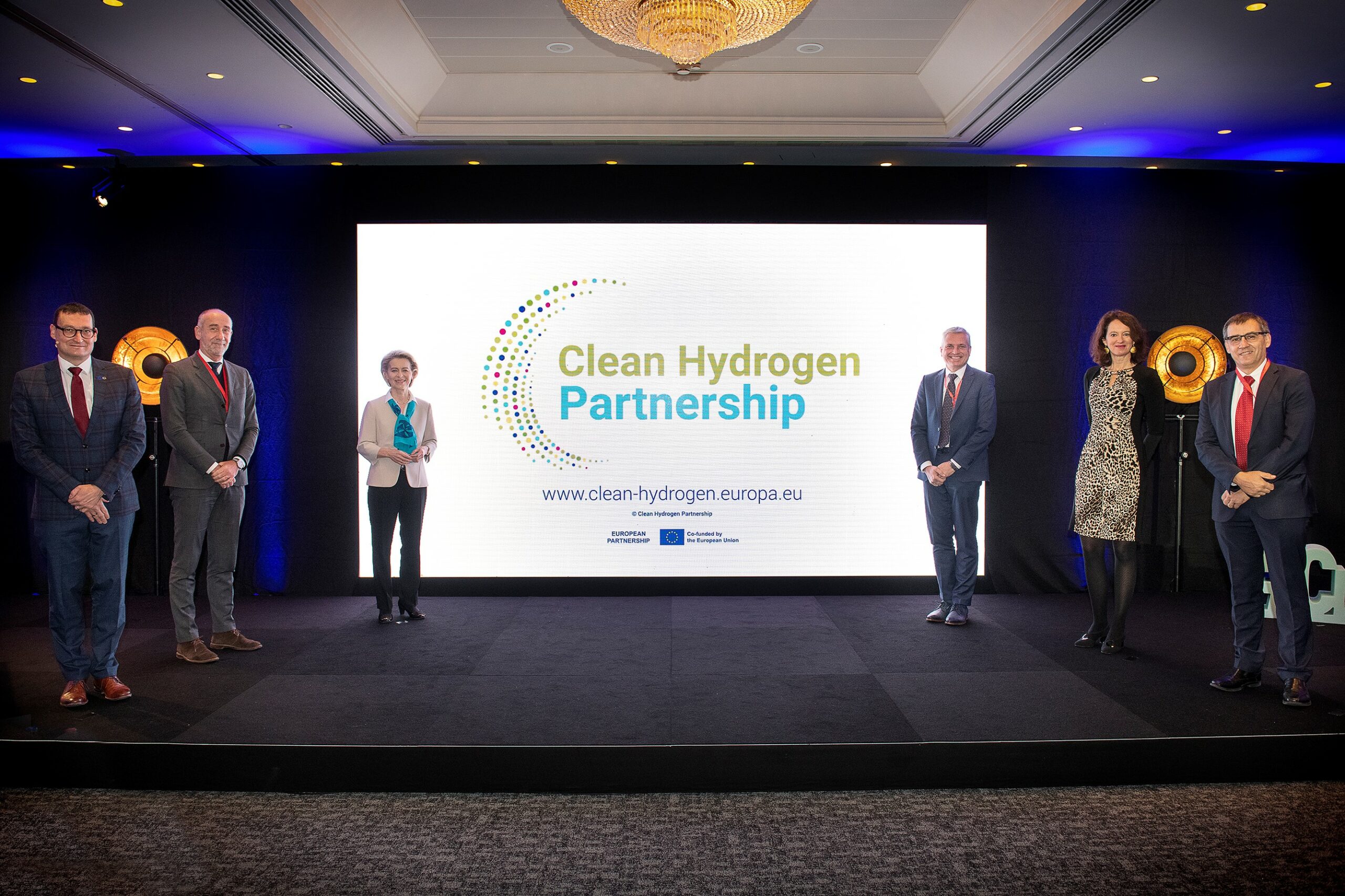 The second edition of the European Hydrogen Week kicked off on 29th November with an opening address from the President of the European Commission, Ursula von der Leyen, in which Green Hysland was highlighted again as a positive example for the clean energy transition. Image: FCH JU

Almost 2000 registered participants are joining online speakers from across Europe and beyond to discuss how to move forward in the transition to a clean hydrogen economy in the EU and beyond.

One of the highlights of the Hydrogen Week is the launch of the Clean Hydrogen Partnership, which will take over all the activities of existing Fuel Cells and Hydrogen Joint Undertaking (FCH JU).

President von der Leyen said in her opening speech: “Clean hydrogen will have a central place in the climate-neutral economy of the future and I am proud of Europe’s role as the world’s clean hydrogen trailblazer.” She also highlighted Green Hysland and its sister project HEAVENN as key hydrogen valleys which should encourage other European regions to follow: “(…) [Northern Netherlands] has large quantities of renewable energy from its offshore wind turbines. Two electrolysers will use this renewable energy to produce green hydrogen. This hydrogen will then power up industries, it will fuel public transport, it will heat up homes, and be stored underground. By the end of 2025, the Northern Netherlands will host a complete green hydrogen value chain. And this hydrogen valley will create more than 20,000 jobs in the region. It is a project we are proud to support. And we are expanding the same model to other areas, there are many areas that want to follow, from the island of Mallorca to the border region between Italy, Slovenia and Croatia. This is how we can accelerate the hydrogen economy on a local scale, on our way towards a European hydrogen economy as a whole.”

Jean-Eric Paquet , Director-General of DG Research and Innovation, highlighted the importance of hydrogen valleys: “to further build the hydrogen economy in the EU, we need to ensure that the whole of the EU benefits from hydrogen production scale up, distribution and end-users applications, more European Hydrogen Valleys for instance are needed and it would be important to build connections between old and new European Hydrogen Valleys”.

“The Clean Hydrogen Partnership is built on more than a decade of successful research and innovation in Europe and it is now ready to contribute to Europe’s green evolution together with the other partnerships. It’s a great result for the entire community and I’d like to congratulate the industry, research and policy partners as well as the programme office for their work during these past years”, commented Bart Biebuyck, Executive Director of the FCH JU.

A global rules-based market for hydrogen, in particular renewable hydrogen, needs to develop with, at the heart of that market, harmonised safety and environmental standards as well as clear rules and suitable infrastructure.

In the afternoon, Executive Vice-President Frans Timmermans gave a special address on hydrogen in the global dimension: “While the dynamics are there, we still need to do a lot. Global trade in hydrogen does actually not exist today. Clean Green Hydrogen is still far too expensive everywhere, so technology cost reductions and scale-up are urgently necessary. A global rules-based market for hydrogen, in particular renewable hydrogen, needs to develop with at the heart of that market, harmonised safety and environmental standards as well as a clear rules and suitable infrastructure. I want the EU to take the clear lead in establishing such a framework for a global hydrogen economy. We are ready to work with all partner countries to establish the right conditions for the emergence of a global market for a secure and competitive renewable hydrogen supply.”.

The Council of the EU has adopted on 19 November the regulation establishing Clean Hydrogen Joint Undertaking (Clean Hydrogen Partnership).

Clean Hydrogen will build on the success of FCH JU to accelerate the development and deployment of a European value chain for clean hydrogen technologies, contributing to sustainable, decarbonised and fully integrated energy systems. The EU will support the Clean Hydrogen JU with €1 billion euro for the period 2021-2027, complemented by at least an equivalent amount of private investment (from the private members of the partnership).

Together with the Hydrogen Alliance, it will contribute to the achievement of the Union’s objectives put forward in the EU hydrogen strategy for a climate-neutral Europe. It will focus on producing, distributing and storing clean hydrogen and on supplying sectors that are hard to decarbonise, such as heavy industries and heavy-duty transport applications.

Read the full speech of President Von der Leyen at the opening of the European Hydrogen Week.

Read the full statement of the Council of the European Union on establishing joint undertakings under the Horizon Europe programme.

Read the full statement of the European Commission.