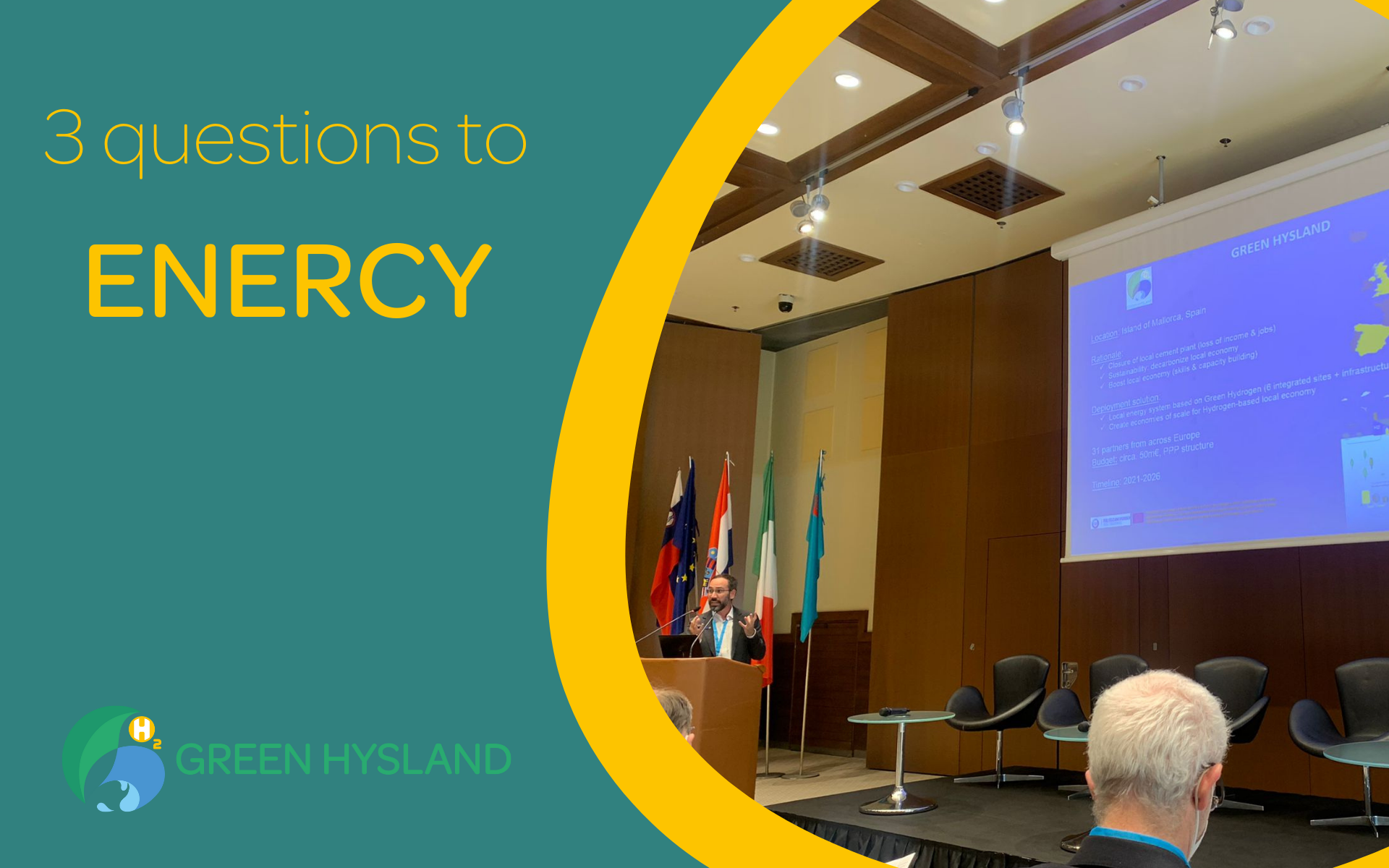 Convinced that green hydrogen will play a key role in the energy transition, Enercy is putting their 20- year experience to good use in our Green Hysland project. Read our interview to discover how.

Co-designer of Green Hysland, Enercy is an international engineering consultancy specialised in the Clean Energy Transition through the development and deployment of Green Hydrogen Hubs. They have over 20 years of experience in hydrogen deployment projects, including in the development of locally integrated hydrogen ecosystems or Hydrogen Valleys (e.g, BIG HIT and HEAVENN projects). In the interview below, they shared their know-how with us, but also a glimpse of the work being carried out at the moment to implement the Green Hysland project.

What is the role of Enercy in the Green Hysland project?

Our role in the project spreads across four main tasks:

You are thus one of the partners advising the deployment of pilot activities taking place in Mallorca. Can you tell us what is going on there at the moment?

Currently we are supporting the technical coordination and deployment activities of the Green Hysland project as members of the Deployment Advisory Group (DAG). This Group drives the preparation for the deployment phase of the project. Within the DAG, we support the project coordinator and the deployment task leaders, by contributing our operational experience from previous hydrogen projects, helping facilitate resolution of issues, overcome deployment challenges and share best practice when required.

Additionally, during the project inception we worked closely with Enagas and the rest of local stakeholders to help design and develop the project concept, and we led the preparation and submission of the EU proposal that was successfully granted 10 million euros by the FCH JU. During the project development phase, we worked closely with Enagas and the local stakeholders to integrate Green Hysland with the rest of pilot deployment activities ongoing and under planning in Mallorca.

Enercy is also involved in the HEAVENN project. You seem to think green hydrogen will play a key role in Europe’s decarbonisation?

We firmly believe that green hydrogen will play a key role in the energy transition, as we move away from a fossil-based economy towards our net-zero objectives. Indeed green hydrogen can allow full decarbonization across multiple energy sectors (e.g. transport, heat, power, industry), at local, regional and national level, while using locally available renewable resources to enhance energy security and boost local and regional economies. That is why we strongly support the implementation of green hydrogen as a clean energy vector; and this is why we have a strong focus on supporting the development of green hydrogen hubs, like the HEAVENN project, the first fully-fledged Hydrogen Valley implemented in Europe, in Northern Netherlands. We transferred some of the lessons learnt within HEAVENN into the development of Green Hysland in Mallorca. This is our contribution from Enercy, what we call “learning by doing”, sharing knowledge and lessons learnt, so that we avoid reinventing the wheel and we become more efficient in the implementation of new local and regional Hydrogen Valleys across Europe and beyond.

Stay tuned for more news of Green Hysland partners and the deployment of pilot activities in Mallorca!