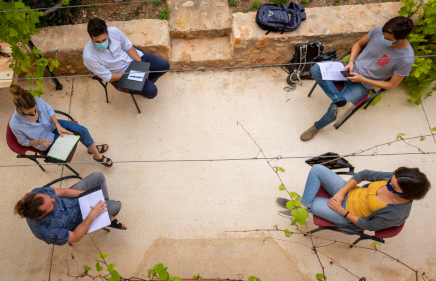 The University of the Balearic Islands, one of the Green Hysland project partners, is facilitating citizen engagement on the Balearics.

Last year, the Interdisciplinary Lab on Climate Change of the University of the Balearic Islands (LINCC) identified the need for organising a Citizens’ Climate Assembly on the Balearics. It aims to foster action on global warming and facilitate a bottom-up approach in developing the islands’ energy transition.

Considering islands’ characteristics and the technical as well as behavioural and social changes needed to tackle climate change, involving island communities in the definition of decarbonisation strategies may help to prevent counter opposition from local actors. Reasons to oppose such plans are manifold like economic uncertainties, the feeling of threat by the transition and change, or low perception of climate change associated risks. Climate assemblies empower people and put them at the centre of the decision-making process. They are sharing responsibility for defining priorities for such a transition.

The aim is to organise one assembly per Balearic Island (Mallorca, Menorca, Eivissa, Formentera) with four sessions each and another two sessions at the regional level. Each assembly will be adjusted to the islands’ needs as they all differ.

Through the Climate Change Experts’ Committee of the Balearic Islands, the University of the Balearic Islands (UIB) contacted the European Climate Foundation (ECF), which has been providing support to such Citizens’ Climate Assemblies all over Europe for some time. In April 2021, the UIB has set up a team of 6 people based in Mallorca, Menorca, Eivissa, and Formentera with the financial and technical support of the ECF. This team is working to provide a detailed proposal on the best way to organise such an assembly on the Balearic Islands.

After a first round of meetings with all relevant stakeholders from the islands, including, e.g., island councils, private sector actors, and NGOs, a first draft has been distributed to them. The stakeholder’s feedback will help to define the definitive proposal, which will be presented to the public in the last week of September 2021. The objective is to engage the local and regional authorities in a commitment to launch the citizens’ assemblies during the first semester of 2022. According to UIB, the feedback from island stakeholders has been positive so far, rendering their undertaking a useful tool for associating society with strategic planning.

To make the assembly a success, they are working closely with the Spanish Authorities and the Basque Centre on Climate Change (BC3) to ensure the reinforcement between the Balearic and Spanish Assemblies while building on experience from previous climate assemblies in Ireland, the UK, France, or Scotland.

For more information, check out these links (Catalan):

Picture: University of the Balearic Islands